This years Charity Ball, Organised this year by Lez Collins and Julie Webber, was in aid of 2 very worthwhile charities,  The Dorset and Somerset Air Ambulance and S.U.R.E - Somerset unit for radiotherapy equipment at Musgrove park hospital, Taunton. 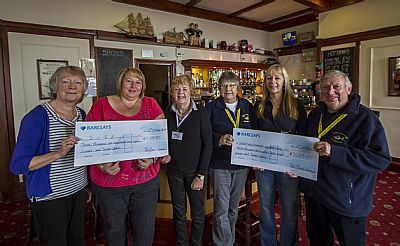 It was held again at the Hobby Horse on the esplanade in the refurbished Ball room,  which was so generously donated to us by Carol and Derek Merson.  We have been organising these "charity Balls" now since 2007 and this was our 5th one in which we raised an amazing £6,218 giving us a grand total so far for local charities of over £29,000.  The idea started when after a party we decided we love the idea of having a reason to dress up and wouldn't it be great if we could raise money at the same time,  within days the venue was booked and the Charity Ball was being organised.  It becomes easier each year with the local businesses continually supporting us and this year we had Butlins join in with a very generous cash donation and some food for the evening.  We have so many people to thank for help, support and donations however small as it all goes into making our nights such great evenings with the money raised shocking us each time.

This year we had Paul Yates D.J and compère,  The Defibrillators rocking us,  Johnny Mars with his blues,  Steve Brown took photo's on the night while Friday Street Photos and Print supplied the finished product, Morgans hog roast the pig for the night which was donated by court farm butchers and the food for the evening came from so many kind and generous local businesses.  The Chef at the Hobby Horse cook us up a hot and cold buffet while Ministry of Cakes donated all the puddings (all 10 of them!).

The organisers would like to thank everyone who donated and helped with the event. Our next Ball will be in 2016 giving everyone chance to recover from this one :)

We divided the total into 2 cheques which the photo shows us handing over to the representatives of the 2 chosen charities.