The New Horizon Singers held a concert at the Silver Street Baptist Church on Wednesday 29th June 2016. The profits from the evening were shared between the Devon and Somerset Air Ambulance and S.U.R.E.. The concert was well attended and was very enjoyable with a wide range of songs which included a medley from Oklahoma and the Beatles song, Eleanor Rigby. The guest soloist was Tony Blackshaw who has appeared in principal roles with a number of Operatic Societies and recently The Taunton Amateur Operatic Society. 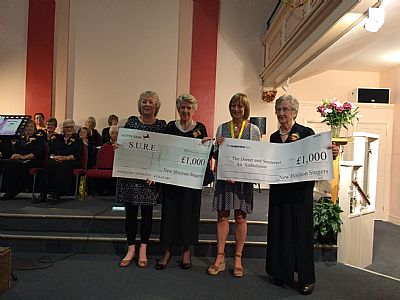 S.U.R.E. is very thankful to the New Horizon Singers for their many years of support during which time it is estimated that they have raised in the region of £40,000.